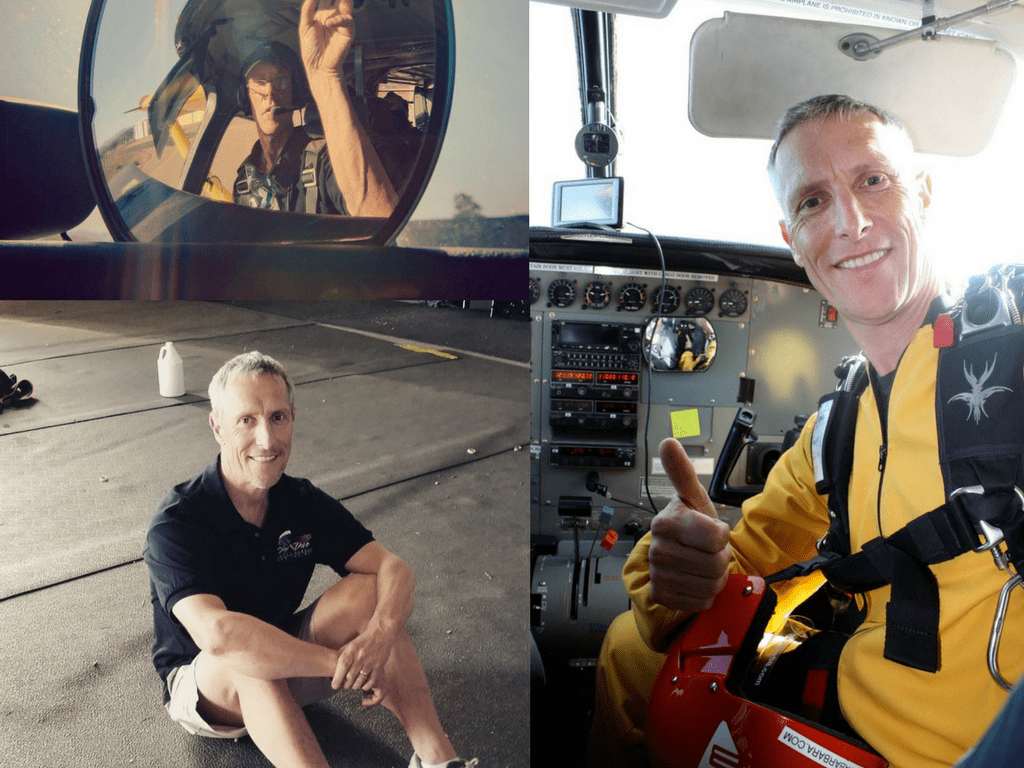 19 Mar Meet the DZO: An interview with SSB’s David Hughes

We sat down with David Hughes, dropzone owner and operator of Skydive Santa Barbara, to learn a bit more about the Englishman who you’ll always find chatting up customers at the Lompoc, California skydive location.

Dropzone Staff: Where were you born and raised? What was your first job?
David Hughes: I was born and raised in a beach town on the Southeast coast of England called Felixstowe. Felixstowe Docks is the biggest container port in England. My first job was being a longshoreman at the docks. This job entails loading and unloading cargo from ships. It was all manual work, then after a few years I was able to drive trucks and cranes at the docks. I was a docker for 12 years before I left England to come to the US.

DZ: Where are you living now?
DH: I now live in Lompoc, California with my wife Karen and two sons Tyler (12 years old) and Sean (9 years old).

DZ: Where was your first skydive? Tell us about that, and how you got your start into skydiving.
DH: In 1977 I did my first jump in a town called Ipswich in England. I was hanging out with two of my friends in a pub who had just started parachuting. In those days it was called “parachuting” because your first jumps were static line, which are just like military jumps where the chute is pulled out automatically after you exit from the plane.

Many of the local jumpers were in the pub as well and I really enjoyed hanging out with them — but the thought of jumping out of a plane scared the crap out of me. I was 18 years old and had never flown in a plane! After a few beers I had the courage to say that I would do it, so next morning I started my First Jump Course. After my training I had to wait until the conditions were ok, then at about 4 pm I took off for my first plane ride. The aircraft had no door and I was the first of two people to leave. I remember jumping from the plane on my own and wondering why I was doing this, when I could be safe at home drinking tea and watching TV. After landing at the airport my friends asked if I would jump again, and I said “of course!”

DZ: What is your most memorable skydive – or if there are multiple, we’d love to hear about them.
DH: My most memorable skydive was achieving the 126-way world record formation in Belgium that I was part of on July 11th in 1987. It took about 24 jumps to achieve and I had to dock on the same slot every time. Many people around me were taken off and replaced by other skydivers, so I was under a lot or pressure to perform. With all the jumps in over a period of about a week it was just a relief to get the job done! Also in 1987 I was part of an 80-way formation skydive over Bangkok, Thailand. This was in front of the King of Thailand for his birthday, and was the biggest skydive formation in Asia at the time.

DZ: What type of skydiving do you prefer – any discipline favorites?
DH: I like to try all types, but I gravitate to belly flying and freeflying.

DZ: What is your favorite part of skydiving?
DH: Hanging out with the skydivers.

DZ: What gear do you use when you jump? Any favorites?
DH: My favorite main is the Chaos 87 from Precision. For a container I like Vector.

DZ: Why did you start Skydive Santa Barbara?
DH: I was over the heat of Paso Robles, which was my first dropzone… and Lompoc offered cooler weather and good surf!

DZ: What is the best thing about your dropzone, Skydive Santa Barbara?
DH: The aircraft is awesome. We have the fastest single engine skydive plane in the US. The ocean views are awesome, and the staff is second to none.

DZ: You’re also a pilot. Can you tell us a little about that?
DH: I started flying because I had just completed what I wanted to do in skydiving. It was about 1988 and I thought, “I’ll get my pilot’s license for something to do”. After three months, I had my license and thought, “I’ll take up aerobatics because it sounds like more fun than just flying places”. After doing aeros for a while, I decided that maybe I could be a pilot as a full time job. It seemed better than working as a docker (which I had done for the last 12 years). In the US, flying is a lot cheaper than in England, so to become a commercial pilot I moved to the US. At the time it was a huge risk moving to the US, I didn’t know anyone in the US and I had to give up my job, which was guaranteed for life with a good pension. But I was single with no responsibilities… so why not!

DZ: What has been your most fun flight so far?
DH: My most fun flight to date was doing my first aerobatic maneuver called an aileron roll. I was checked off to do the maneuver on my own but I messed up the first one by going too slow when the plane was inverted. With the plane stalled upside down everything in the cockpit went flying all around me (pens, dirt, paper, books etc.) At the time I thought it was the most fun thing ever! Being in that position isn’t bad, you just need to handle coming out of the dive properly and make sure you don’t build up too much speed, which could damage the structure of the plane.

DZ: What do you like to do, besides operating the dropzone and skydiving?
DH: I used to hang glide a lot in my spare time, but then I fell in love with surfing. The best day for me is surfing, skydiving and then having a Guinness.

DZ: Who are your inspirations, in skydiving and/or in general?
DH: Pat Slattery was my first DZO and he was a pretty interesting character. On my first freefall jumps he would have the pilot fly the plane around me while I was flying under my round parachute and he would scream at me, which meant it was a good jump believe or not!

Another skydiver, Niel Reeves, (who had the same ability as me which at the time was basically nothing), would jump with me a lot and try to connect in freefall. We would fly passed each other try to grab a leg or arm. Finally on my 100+ jump we did a good two-hand dock. After that, Niel and I travelled all over France and England jumping with other jumpers, and very slowly my skydiving improved. My lucky break came was when I was jumping at a DZ called Pampisford in England. I had about 500+ jumps and a jumper who was in a 12-way team couldn’t make a competition and told me could I take his place. I agreed, then he told me it was a very good team and not to screw up. I arrived at this DZ (which I had never jumped at) and all the jumpers on this team were ex British Skydive Champions. I had never met these people let alone jumped with them — I knew all of their faces from the British skydive magazine, and in my mind these were sky gods!

The first jump with these guys I flew as fast as I could go, and after three jumps with them I knew at that point that I could keep up. We won the competition and then after that I was invited on all the cool jumps going on in England, and I became part of a small group of elite jumpers in the United Kingdom. It was a really fun time!

DZ: Any advice for new jumpers?
DH: Enjoy the journey, it sounds corny but it’s so true. Don’t be hard on yourself. To help with the nerves think about yourself as being the best jumper in the plane — it really helps just to give yourself a little confidence.

DZ: Anything else you’d like to add?
DH: Yeah, my favorite food is Indian and I’m addicted to dark chocolate!